This award is open to any lady. The candidate cannot be an Officer in the Lodge or an employee. She may or may not be an Elk.

Local Lodges are to submit one written nomination of 500 words or less identifying the accomplishments of the candidate. Entries are based of the persons’ support of Elkdom at the Lodge, State Association, and/or National level during the past year. 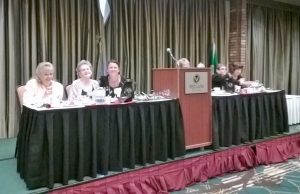 The State winner will be announced at the Polly Garland Award Luncheon where she will receive appropriate recognition along with a $1,000.00 Scholarship for a deserving student from her Lodge which nominated her.

Do NOT follow this link or you will be banned from the site!
Washington State Elks Association